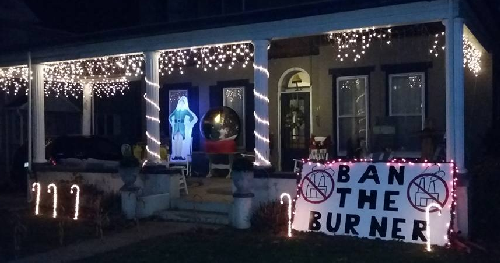 Just in time for the holidays, residents of the rural town of Muncy, PA just had their local borough council pass into law a set-back distance ordinance we wrote. It prohibits any new facilities requiring a state air pollution or waste permit from locating within 900 feet of an occupied dwelling, school, park, or playground.

This effectively blocks Delta Thermo Energy, a company we've been fighting for several years, having stopped them in 2014 from locating in the City of Allentown, PA. They planned to take 100-200 tons per day of trash and sewage sludge, turn it into "fuel pellets" through a "hydrothermal decomposition" process, then incinerate these waste pellets on-site. Of course, their magical process exploits an EPA loophole, allowing this waste not to be considered a waste anymore, so they can be regulated less strictly -- as a boiler or power plant, not as an incinerator.

They came to Muncy, PA in the summer of 2016, proposing the same, but after facing resistance, the proposal soon became one to just make the pellets, and market them to be burned in coal power plants in Pennsylvania, Ohio, and West Virginia. EPA's Clean Power Plan, and their Non-Hazardous Secondary Materials ("waste = fuel") rule incentivize this. While the Clean Power Plan is dead for now, the other incentives may continue, and could encourage coal plants to stay open longer than they otherwise would, and become dirtier by starting to burn waste without additional pollution controls.

Delta Thermo Energy has been unusually tenacious. Most companies give up after one or a few times being rejected. We expect to have to beat them again soon, as rumor has it that they may be looking at more sites near Muncy. They brag about having 22 local governments interested between Pennsylvania and New Jersey, and we know of several that have already rejected them. Keep an eye out, and be in touch with us if they (or any other polluters) are coming your way!

We'd love to work with other communities to get protective local ordinances passed to stop proposed or potential polluters, or to even set stricter requirements for existing facilities where possible. Please be in touch if you'd like to work together on this approach in your community. Do not simply copy ordinances we've had passed elsewhere. While most of the Muncy ordinance is as we proposed, some good things were removed or kept out, and it could have been stronger in some regards. Every community is different, so feel free to check out the resources we have on stopping polluters with local ordinances, but contact us to help develop a strategy that makes sense for your situation. Thanks!