[[{"type":"media","view_mode":"media_large","fid":"548","attributes":{"alt":"","class":"media-image","height":"287","style":"width: 333px; height: 199px; margin: 3px 10px; float: left;","title":"Photo: Inhabitat.com","width":"480"}}]]Since 2011, Maryland has been notorious for being the only state to classify trash as equivalent to wind power in a renewable energy mandate. Over half of the "renewable" energy used to meet the mandate still comes from smokestacks at paper mills, landfills, trash, and biomass incinerators in 12 states spanning New Jersey to Wisconsin to Tennessee.

For the past few years, we've been warning that expanding a dirty renewable energy mandate without first cleaning it up would mean trouble. In recent years, Maryland has faced plans for two large new incinerators, which were closer to reality than any in the nation. These fully permitted incinerator proposals both fell to defeat after five and eight year grassroots efforts. Destiny Watford, a Baltimore resident who got involved while attending the high school within a mile of the proposed Energy Answers incinerator, just received the prestigious Goldman Environmental Prize for her leadership in that battle.

Despite these high profile incinerator battles, the Maryland Climate Coalition (a coalition of mainstream environmental groups, led largely by Chesapeake Climate Action Network) chose to keep pushing to expand the state's Renewable Portfolio Standard (RPS) while declining to support the parallel effort to first remove smokestack technologies from the mandate. The bill we drafted to clean up Maryland's RPS was introduced with strong support from the Maryland Chapter of Sierra Club, and many of us testified at hearings on the bill, which was aggressively opposed by the incinerator and paper mill industries. 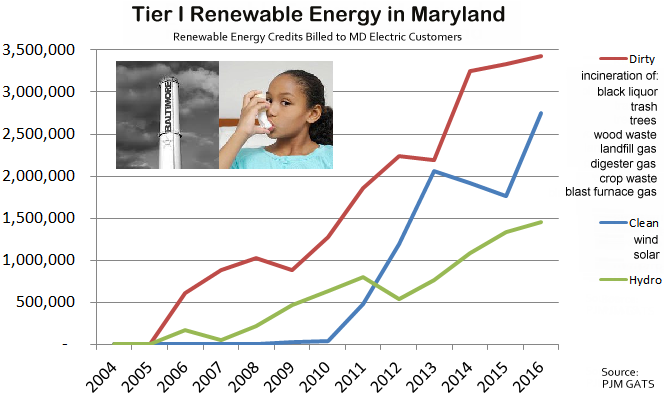 While our legislation was handily shot down, we did a lot to educate legislators and build momentum for next year. As the RPS expansion bill passed, an amendment to strip trash incineration out of the law came within one vote of passing! This is a good sign for next year, especially as both major trash incinerator proposals in Maryland are now dead, and the smallest of three existing incinerators just closed for good in March.

The data for 2015 just came out, showing that

wind power declined for a second year in a row, while dirty "renewable" energy increased again, with biomass use nearly doubling while black liquor burning at paper mills also increased, though use of trash incineration thankfully fell.

In related legislative efforts, the Northeast Maryland Waste Disposal Authority was the subject of a battle we won. The Authority has been the driver behind existing and proposed waste incinerators in Maryland. In 2015, we worked with Caroline Eader and Frederick, Maryland residents (who fought off the Authority's incinerator proposal in an 8-year battle) to pass a bill redefining the Authority's mission to be about zero waste. The Authority objected and we came within one vote of passing the bill. In 2016's legislative session (that ends in early April each year), the Authority pushed a bill to expand their powers, pretending they were about "resource recovery parks," but seeking to be able to bond a wide range of waste and energy facilities, including many dirty technologies, while bypassing state utility approval processes.

Energy Justice staff, Dante Swinton and Mike Ewall, were the only ones to testify at the hearing before the Maryland Senate Environmental Committee. The Authority testified that "waste-to-energy" (incineration) is not politically or economically viable in Maryland, and insisted that they're a service organization to their member counties and that they'd follow the lead of the legislature if they prescribe a zero waste hierarchy.

With help from Sierra Club and other allies, we beat back the bill in the House, with spectacular skepticism expressed by Maryland Delegates at the hearing where we all denounced the bill. In the course of all of this, we developed some good momentum to beat back incineration and push for true zero waste in the 2017 session.