Covanta Settles for $536,211 in Lawsuit Over Biomass Ash Testing

The settlement covers Covanta Energy LLC's Kern County biomass energy facility in Delano, along with other company facilities in Mendota and Oroville.

Kern County will receive about $75,000 as its reimbursement for costs and penalties out of Covanta's total fine of $536,211.

Biomass energy plants burn forest, agricultural and urban wood fuels in order to generate electricity. They produce ash waste streams that are either sent to landfills or have other uses in road building or agriculture.

The civil enforcement action was filed in Sacramento County and asserted that biomass ash sampling and analysis at the three Covanta facilities was not sufficiently rigorous.

The facilities will be bound under the terms of a permanent injunction prohibiting any future violations of law and requiring adherence to the new sampling and testing program for their biomass ash.

In addition to Kern and Sacramento counties, other counties participating in the action were Butte, Fresno, Glenn, Stanislaus, Tulare and Tuolumne.

I have created a new flyer for Energy Justice Communities Map, Justice Map, and the Spatial Justice Test for Race and Income. Feel free to use this flyer at any event (like a conference, protest, workshop, class, etc) where people might be interested in these projects. 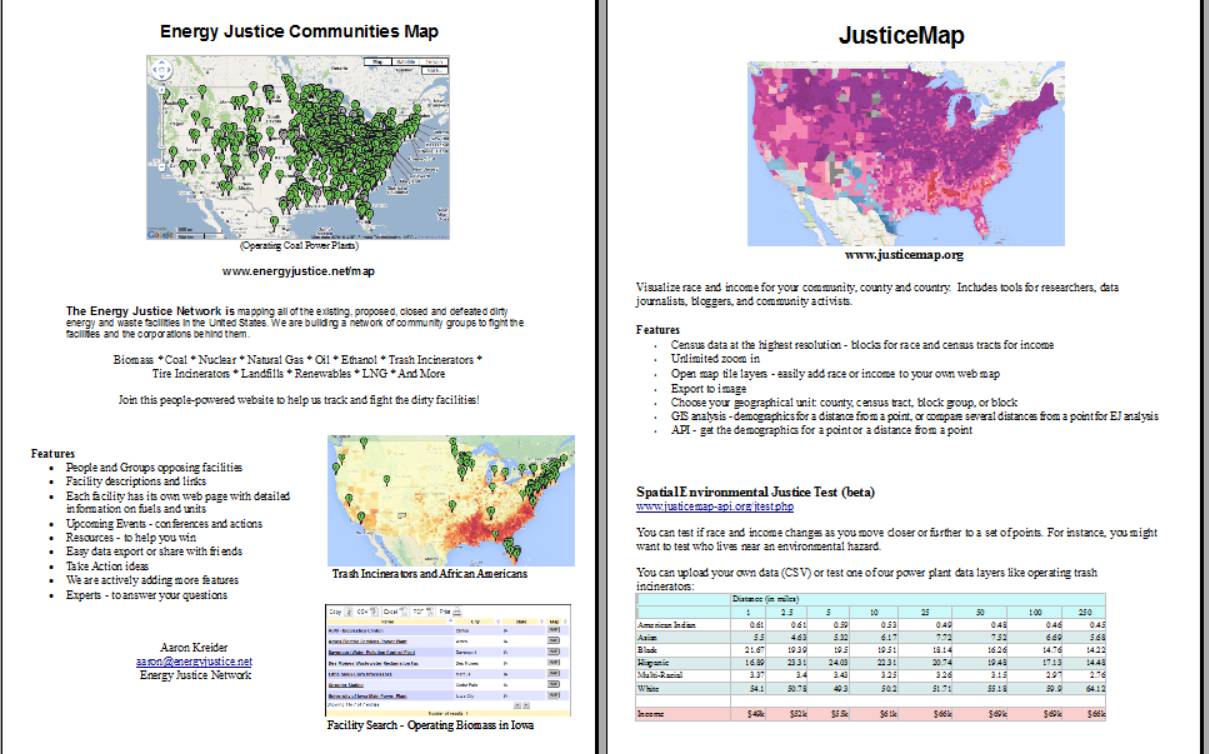 William A. Vasden Jr. who once headed the Florida Feedstock Growers Association, was sentenced to four years in federal prison in a Fort Myers courtrom.

The scam was uncovered by the Florida Department of Agriculture and Consumer Services during a top-to-bottom audit of outstanding grants and projects conducted immediately after the department assumed responsibility of the state’s Office of Energy.

“Our audit exposed several cases of fraud, saving more than $2.4 million in taxpayer dollars,” said Commissioner of Agriculture Adam Putnam. “Misuse of public funds is unacceptable, and those who have committed fraud will be held accountable.”

[[{"type":"media","view_mode":"media_large","fid":"343","attributes":{"alt":"","class":"media-image","style":"width: 198px; height: 198px; margin: 3px 10px; float: left;"}}]]On Nov. 4, Americans voted. This election was a decisive victory for Republicans. Senate, House, gubernatorial and even state legislature races across the country saw conservatives prevail. These results were expected, surprising to political types only in the thoroughness of the wins across the board.

What does this mean for biomass? It’s clear that this election signals the need to adjust our interactions with elected officials, but it’s not yet clear what shape that change will take. We will have a better sense of the new Congress’s direction after it is sworn in. The initial signs, however, indicate that there will be a lot we can work with, beginning with an emphasis on the economic benefits of biomass.

We expect that renewable energy, which had been gaining momentum as a key issue among Democratic leadership, will not be as high a priority for this Congress. Rather than focusing on the environmental benefits of biomass, there will likely be a renewed interest in biomass as an energy source that employs tens of thousands of Americans in rural areas.

Elcon Recycling Center, which has an office in West Windsor, went before representatives of Pennsylvania’s Department of Environmental Protection Wednesday night detailing plans to construct the facility on 22 acres at 100 Dean Sievers Place.

Rengarajan Ramesh of Elcon said the facility will use environmentally sustainable technology to transform industrial liquid waste into clean water, cutting down more on solid waste and lowering air emissions compared to other industry practices.

“It will be a completely sealed system to the point there are no odors coming out,” Ramesh said.

Elcon’s proposal is unrelated to the hazardous waste incinerator proposed earlier this year in Bristol, Pa. and later put on hold.

About 90 to 95 percent of waste Elcon treats is water that has not been used in the fracking process and can be reused, Ramesh said. The existing site is considered a brownfield and Elcon plans to improve conditions there, he said.

But members of the Delaware Riverkeeper Network and Pennsylvania League of Women Voters said Elcon would annually treat 210,000 tons of raw hazardous waste, including mercury, lead and cadmium.

Red papers reading “hazardous waste” with a circle and line through the middle were handed out by group members present at the meeting.

Incineration would produce 39 tons of air emissions containing pollutants such as hydrochloric acid and nitrous oxide that could make their way to areas of Mercer County and Bordentown, environmentalists said.

Is Cellulosic Ethanol All it’s Cracked Up to Be?

The EPA has long promoted cellulosic ethanol as the future of biofuels, but technical challenges have kept production far below targets. A recent rule change allows RNG, renewable natural gas, to qualify as cellulosic biofuel even though RNG is not cellulosic, but this helps EPA appear to be meeting their goals.

RNG growth has been dramatic and is the lowest carbon vehicle fuel available today. Perhaps the EPA should be promoting a Renewable Gas Standard instead of a Renewable Fuel Standard.

In 2013, production of cellulosic ethanol was effectively zero, even though the legislated target volume for for 2013 was 1 billion gallons. In August 2013, EPA reduced the target to 6 million gallons, and again reduced the target retroactively to 810,185 gallons, less than 1 million. By all accounts this represents a complete failure of the cellulosic ethanol program. In July 2014 the EPA revised the cellulosic biofuel rules to allow RNG to be categorized as cellulosic.

Hundreds piled into County Commission chambers, some having arrived on a bus from the Wynmoor Village senior condo coummunity in Coconut Creek. City officials and residents there fear the displaced trash could end up heaped upon the landfill, officially named Monarch Hill but long dubbed Mount Trashmore by locals.

Waste Management's Wheelabrator Technologies Inc. wants Broward County Commission approval to stop using the northern trash-to-energy plant. Under the proposal, the garbage would rumble south in trucks through the heart of the county to an incinerator on U.S. 441, north of Griffin Road.

Biomass Incinerator a Threat to Children

- by Norma Kreilein, MD, Fellow of the American Academy of Pediatrics

[The biomass facility proposed for Jasper, Indiana referred to in this letter was canceled this year thanks to the hard work of Dr. Kreilein and Healthy Dubois County –Ed.]

[[{"type":"media","view_mode":"media_large","fid":"339","attributes":{"alt":"","class":"media-image","height":"282","style":"width: 255px; height: 169px; margin: 3px 10px; float: left;","width":"426"}}]]I am writing as a concerned pediatrician in Southern Indiana. We live in the heart of the power plant belt of the Midwest. For many years I have suspected that our local pollution is greatly responsible for our high rage of inflammatory processes, malignancies, and increasing rates of autism.

I have been trying to fight the addition of a biomass plant to our city. The city has long been an industrial base with many wood factories, so there has apparently been a high VOC load. In addition, we live near many power plants. There was a coal fired municipal power plant within the city limits and very near a residential neighborhod since 1968. The city has said that the plant has been shuttled for approximately the past 3 years because it isn't "profitable."

They have been planning a biomass refit for the past 3 years, although the plan became more public only less than a year ago.

Strong opposition was voiced from the time it was publicly mentioned, but the city has pushed the plant through, anyway. Much manipulation of emission data has occurred (averaging emissions out over the whole county to make them appear insignificant), but ironically one of the more interesting arguments is that the plant, though polluting and within 1/2 mile of a residential neighborhood, should nonetheless be built because the plant will decrease our dependence on coal fired plants.

Essentially the argument is to build more so we are not as dependent on the ones we can't seem to shut down. Many of the arguments against coal-fired plants are used by manipulative entities to justify continuing to poison the population. In our particular city, the greed for development appears to take precedence over the consideration of air quality.

Until the EPA begins to mandate states to use more accurate exposure models (better than averaging concentrated pollution over a county), states like Indiana and cities like Jasper will continue to actually increase pollution.

Biomass combustion is being sold to communities around the country by high pressure, ambiguous, unscrupulous carpetbaggers who promise "jobs" and "green energy" but are vacuuming precious federal funds to produce expensive energy that will never solve our dependence on foreign oil nor make our air any cleaner. Worse yet, they use existing knowledge about coal-fired plants and aggressive manipulative mathemathics to convince communities that the particulate/dioxin emissions will be nonexistent or "minimal."

The ultimate problem is that the same monitors and regulators that fail to close down coal plants will do no better with biomass. We will just spend more and think we feel better about it.

I Can’t Breathe: Air Pollution Worse for Communities of Color

[[{"type":"media","view_mode":"media_large","fid":"338","attributes":{"alt":"","class":"media-image","height":"270","style":"width: 333px; height: 187px; margin: 3px 10px; float: left;","width":"480"}}]]In North Carolina, scientists from the Environmental Protection Agency have found a “stable and negative association” between poor birth outcomes among women and their exposure to air pollution. That’s pretty much common knowledge, if not common sense, no matter what state or country you look at. But the EPA scientists also noted that “more socially disadvantaged populations are at a greater risk,” even when subjected to the same levels of air pollutants.

Translation: If you have the misfortune of being born poor and black in North Carolina, you’re more likely to arrive in this world underweight and undernourished, on top of being underprivileged. Polluted air only makes your situation worse.

The study, published in the January 2014 Journal of Environmental Health, covered women who gave birth between 2002 and 2006 across the entire state. It was built upon a catalog of previous surveys that have found “significant and persistent racial and socioeconomic” disparities for poor birth outcomes like infant mortality, low birth weight, and premature births. Throw air pollution into the mix — particulate matter and ozone, which the EPA researchers measured in the study — and the disparities deepen.