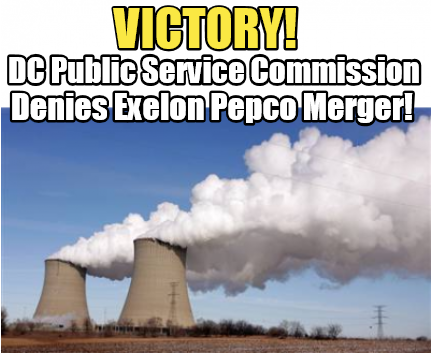 DC's Public Service Commission just shot down the plan for the nation's largest nuclear utility, Exelon, to buy Pepco, the electric utility that services the Washington, DC area and a few neighboring states.

This is a huge victory for ratepayers and the environment, since Exelon wanted to have the extra millions of ratepayers to push the high cost of their aging nuclear reactors onto. They also have been hostile to renewable energy.

We played a small role in this, alerting people in DC to the hearings in the past year, and testifying at three of them. However, the major credit goes to the Power DC coalition, and the many people and groups who came and spoke out about this awful deal. Thanks to all who make this victory possible! DC was the last hope, as neighboring states have already approved the merger. For more info, look for updates on www.powerdc.org and www.facebook.com/PowerDCNow