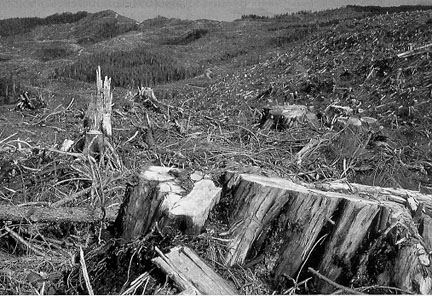 Cellulosic biofuels, also called "second generation" or "advanced" biofuels, are derived from organic plant material (such as wood, grasses, corn stover, wheat straw, etc.) and also from dirtier feedstocks such as tires,1 telephone poles,2 sewage sludge,3 and municipal solid waste (trash).4 As the problems with corn ethanol have become increasingly evident, hopes have shifted to cellulosic fuels. Huge investments in research and development are being made, and the Obama administration has indicated strong support.

Plant matter is comprised of cellulose and hemicellulose, which are essentially sugars, and the structural material, lignin. Plants evolved to protect themselves from being consumed, and so the sugars they contain are not easily accessible. Deriving fuels from these materials is thus a complex, energy intensive process.5,6,7 Most conversion technologies depend on thermal gasification (high temperature and pressure), acid hydrolysis, or enzymes to break down material and access the sugars within.

In spite of the lack of viable technologies for making cellulosic fuels, the U.S. nonetheless passed a mandate for 16 to 21 billion gallons per year of cellulosic ethanol by 2022 in the Energy Independence and Security Act.8 As of July 2008, there were about 55 pilot and demonstration sale cellulosic refineries, in the U.S.9 A commercial refinery operates in Ottawa, Canada, run by Iogen. It uses more energy than it produces10 and is experiencing operational problems.11

The "hype" around cellulosic fuels is based on claims that 1) the feedstocks are plentiful and can be grown on "marginal" lands, and 2) they will not compete with food production, and 3) they will provide better energy balances than corn ethanol. These claims are unfounded.12

Biorefineries require massive and continuous supply of feedstock to maintain operations. These must be accessible within a short distance to avoid transportation costs and emissions.13 The most effective way to provide such a feedstock supply is to use purpose-grown energy crops (industrial monocultures). While some companies claim they will rely on "wastes and residues," the reality is that continual removal of agricultural or forestry residues severely deplete soils and results in erosion. Competition for forestry residues is already intense, with prices rising.14 Industry lobbyists are now pushing to open public and private forested lands for "biomass removal," even as there is increasing recognition of the critical role forests play in regulating the climate. Many facilities are likely to switch to using cheaper (but much dirtier) feedstocks such as construction/demolition wood waste (often treated with toxic chemicals), trash or sewage sludge. In fact, most proposed cellulosic ethanol plants are for trash and sludge.

The idea that there are large quantities of marginal land available to grow feedstock is a convenient myth. Demand for corn ethanol is already threatening the Conservation Reserve Program (CRP) - one of the country's premier biodiversity protection measures. This program rewards farmers for taking land out of cultivation where it will provide valuable habitat and protect soils from erosion and waterways from agricultural runoff.15,16 With incentives to produce more energy crops, CRP lands are dwindling, resulting in loss of critical biodiversity (including pollinators, like bees), contamination of waterways, soil loss and carbon emissions.17,18 The predicted loss of CRP lands in just 3 states will release as much carbon as putting 15 million new cars on the road.19 An analogous program, called "set-aside" lands, in Europe was recently eliminated altogether under pressure to expand cultivation for energy crops.20

The impact of the "marginal land" myth on developing countries has been a disaster. Nearly all land uses that do not contribute to global markets are considered "marginal," failing to acknowledge pastoralists, smallholders21, and biodiversity.22,23 No formal definition for marginal exists.24 Its misuse and false promises25 have caused massive land grabs,26 forced labor,27 lost income, food insecurity and displacement, globally.28

The second myth - that cellulosic feedstock will not compete with food production - is based on this false definition of "marginal" lands. Crops such as switchgrass, while they can grow in less fertile soils, yield more when grown in prime, irrigated soils with fertilizers. Farmer's choices are based on economics: if it pays to grow switchgrass or some other energy crop rather than food, they will do so, on even their best lands. A case in point is jatropha.29

Jatropha has been declared a 'wonder plant' for biodiesel (made from oils, not cellulose). It has been very widely promoted on the basis that it can be grown in arid soil producing seeds with up to 40% oil content. In India, over 14 million hectares of jatropha have been planted with the expectation of such yields. Yet farmers are finding that yields are highly variable and directly correlated with soil fertility and water availability.30,31 Being invasive and toxic, farmers are left with the nasty consequences of poor advice.

The third myth - that cellulosic fuels will provide better energy balances than "first generation" biofuels - is similarly false. Life cycle assessments are notoriously tricky. Industry estimates seek to ignore all emissions from land use change, for example, focusing solely on refinery and combustion. One of the more comprehensive assessments by Dr. Tad Patzek at the University of California at Berkeley found that ethanol from switchgrass requires 50% more fossil energy than the energy return. For wood, the figure is 57% more. This is even worse than for corn ethanol (29% more).32

No life cycle assessment can accurately measure "indirect land use changes" that can occur when large shifts in land use ripple throughout a global system of production and trade.33 For example, when demand for corn for ethanol in the U.S. rose, farmers switched from soy to corn. Unmet demand for soy was met by increasing soy production in Brazil, which was only achieved by clearing more forested land, resulting in a series of connections linking corn ethanol to deforestation emissions.
If such land use changes are included, virtually all plant-based fuels result in increased greenhouse gas emissions.34

The fact that cellulosic ethanol is still being promoted and subsidized in spite of the false claims is testimony to the power of lobbyists and a major "greenwash" campaign on the part of the agribusiness, forestry, biotechnology, and auto industries.

Given extreme soil and water depletion, loss of biodiversity, and an expanding population to feed, does it make sense to add an enormous new demand for plant-based energy?

The U.S. annually consumes 142 billion gallons of gasoline.35 The Energy Policy Act of 2005 mandates production of 7.5 billion gallons per year by 201236 and the Energy Independence and Security Act of 2007 creates an impossible goal of producing 36 billion gallons of "renewable" fuels.37 Planting switchgrass on all active U.S. cropland would replace only 10% of U.S. gas consumption.38 A 2005 joint USDA / Department of Energy report unrealistically estimates availability of 1.3 billion tons of dry biomass, but only by removing most agricultural residues, planting 55 million hectares of energy crops, and using significantly more manure than EPA currently allows.39

Cellulosic fuels are only part of the expanding demand. The trend toward a "bioeconomy" seeks to replace a large part of fossil fuel energy with plant-based energy, including electricity, heat, chemicals, materials and industrial energy. This scale of demand cannot be met while maintaining a habitable planet.

The U.S. has 2.263 billion acres of land, with 52% devoted to agriculture,40 and erosion rates exceed soil regeneration on close to 30% of croplands.41 Iowa's highly fertile soils have declined an average of 10-18 inches just over the past century. Meanwhile, U.S. wetlands have declined by 70%, and both underground aquifers and surface water supplies are dwindling. Irrigation for agriculture uses the bulk of the world's freshwater.42

Such enormous demands for land, soils and water are completely unsustainable, especially in light of the coming impacts of climate change, which will increase energy needs while decreasing agricultural productivity.43

more on Biodiversity and Peaks

Developing both genetically engineered (GE) energy crop feedstock (biotech trees and grasses) and GE and synthetic44 microbes has become the major focus of the biotechnology industry. Unlike GE (biotech), synthetics are entirely human made with no natural foundation.45 In addition to expanding markets for their traditional GE crop varieties, the industry seeks to develop new crops that can be more easily converted to fuel,46 produce more biomass, resist pests, droughts, freezing or diseases, and survive heavier doses of herbicides. For example, a "self-digesting" corn variety is being developed which is more easily converted to ethanol.47 The risk of "industrial fuel" crops contaminating food crops is very concerning especially in light of recent and accumulating evidence on the human health impacts of consuming GE foods. Switchgrass, a native and invasive species,48 is also being subjected to genetic engineering.49,50 This is alarming considering the potential for spreading GE contamination to wild grasses. Companies like Arborgen are developing GE trees for biofuels, raising the specter of irreversible biotech contamination of native forests.51 An EPA study found that GE grasses can pollinate wild grasses as far as 13 miles away.52

The U.S. Forest Service found that GE grass "has the potential to adversely impact all 175 national forests and grasslands."53 Between cellulose-digesting GE enzymes used in the ethanol plants (which could escape if mishandled) and GE trees and grasses (some carrying similar enzymes) planted outdoors where they can spread, the ecological damage is incalculable.54

Resistance to GE crops has been strong in Europe, Africa and elsewhere, based largely on health concerns about eating GE foods. Since fuel crops aren't intended as food, the biotech industry is seizing on this back door entry to their markets.

Ethanol refineries are dirty, energy and water intensive facilities. Some proposed plants would operate incinerators capable of burning toxic waste streams like trash, tires, plastics, and wood waste as well as less contaminated animal, crop, forest and food production wastes. Each produces its own set of contaminants, released into the air, land and water. The dirtiest would use munical solid waste, construction and demolition debris, tires, and treated telephone poles. Even "wheat straw" was found to have chlorine levels seven times higher than the coal it was being burned with, contributing to increased toxic air emissions.55

Among the more common toxic pollutants are volatile organic compounds such as acetaldehyde, acetic acid, acrolein, formaldehyde, methanol and furfural. State environmental regulations are very weak and air pollution permits fail to require that these emissions be monitored on a continuous basis.56 Ethanol itself is highly flammable and a pollutant, presenting a further risk to communities.57

Ethanol is subsidized to the tune of $1.10 to $1.30/gallon, with biofuels in total getting $92 billion from 2006-2012.58 Cellulosic ethanol has further funding and credits such as the 50% write off in the Tax Relied and Health Care Act of 2006. The 2008 Farm Bill added $1.01/gallon. The Department of Energy (DOE) biomass/biorefinery research facility received $110 million in 2006 and expects $400 million in 2009. Other DOE grants are offered and further incentives are given on state and local levels. This money could go much further if invested in conservation, efficiency, wind, solar, tidal, closed loop geothermal and micro hydro. The need for combustible fuels in transportation can be eliminated with the use of electric cars (and plug-in hybrids in the short term), using wind-powered electricity, at a cost less than $1/gallon gasoline equivalent.59

Increasing the average mileage of passenger cars and SUVs by 3-5 miles per gallon would dwarf the effects of all possible biofuel production from all sources of biomass available in the U.S. Inflating passenger car tires properly today will have more impact on the energy independence of U.S. than the 2012 ethanol production requirements.60 Promoting conservation and efficiency measures, public transit, efficient distribution, and localized production would be most effective and are eventual necessities. In light of these needed changes, it's clear that biofuels are not a transition technology61 as they are wasting precious resources while furthering the status quo. It should come as no surprise that some of the biggest corporate investors into biofuels are the multinational Big Oil companies.62