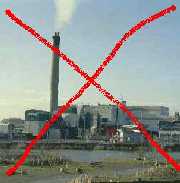 A British corporation named Fibrowatt Ltd. has built three poultry waste incinerators in the UK (later sold to Energy Power Resources Ltd.). They later set up shop in the U.S. with plans to build many more. Their first U.S. target was Benson, Minnesota, where they built the largest "biomass" incinerator in the country - a 50 Megawatt plant that burns 500,000 tons of turkey litter a year, plus 100,000-200,000 tons a crops and/or agricultural wastes. Before the plant was even built, they sold off ownership of the Fibrominn plant to a New York City hedge fund, ContourGlobal's PowerMinn 9090, LLC. Fibrowatt, LLC (now owned by the holding company Homeland Renewable Energy) is promoting several incinerators in the U.S., but does not currently own any. Organized community opposition has stopped Fibrowatt's plans in several communities in the U.S. and Europe.

Once in operation, Fibrominn has racked up numerous violations, including having exceeded permit air pollution limits for nitrogen oxide, sulfur dioxide and carbon monoxide. As a result, the state of Minnesota fined them $65,000 and required that they install a new sulfur dioxide monitor at a minimum cost of $80,000. See the state's Stipulation Agreement for more details.

Poultry waste is NOT a clean fuel. Biomass is NOT "green" energy.

Poultry litter consists of about half chicken or turkey manure and half bedding (wood shavings and sawdust). Fibrowatt's incinerator projects seek to burn about 75% poultry litter plus about 25% "vegetative biomass," which could be anything from crops grown specifically to be burned to crop residue from traditional agriculture to otherwise "non-valuable" wood cut from logging operations in forests.

There are other companies besides Fibrowatt seeking to build poultry and other animal waste incinerators. However, Fibrowatt is the big player, seeking to build the largest of them - and the only one in the U.S. seeking to make electricity to be sold as "green" energy to gullible consumers.

Fibrowatt tends to come up with new names for each of their projects. Below is a list of existing and proposed poultry litter incinerators. They are targeting communities where there is a concentration of poultry waste production from large poultry agribusiness. They aim to truck in poultry waste from a 50 mile radius, sometimes going as far as 90 miles to obtain their "fuel."

Air Emissions Data for three of the Fibrowatt poultry waste incinerators in the UK (Eye, Glanford and Thetford plants) can be found compiled here: Excel format / PDF format for select pollutants. This data was supplied by the Fibrowatt plants to the UK environmental agency.