What Goes In, Must Come Out 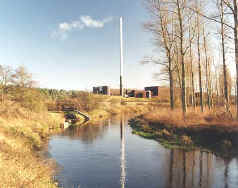 One of the most basic principles of incineration is that what goes in, must come out.  There is no alchemy going on, so if there are toxic heavy metals like lead, mercury or arsenic going in one end, they must come out in the form of toxic ash and toxic air emissions.  When another class of contaminants known as halogens enters an incinerator, you have another situation on your hands.  These halogens (chlorine being the most prominent) are often released in the form of acid gases (contributing to acid rain and respiratory problems) and also are released in small volumes of extremely toxic chemicals called dioxins and furans (among the most toxic chemicals ever studied).[1]

Naturally, when evaluating incineration, one of the first questions becomes "what is going in to the incinerator?" Incineration of poultry waste bring much needed attention to what is in poultry waste and in the chicken and turkey feed itself.

Arsenic Use in Chicken & Turkey Feed

According to the Environmental Protection Agency, "Organic arsenic compounds are extensively added to the feed of animals (particularly poultry and swine) in the United States to improve growth rates by controlling parasitic diseases."[2]  Several other articles and government reports confirm this, including studies by the U.S. Geological Survey looking into the land and water impacts of arsenic-containing poultry litter being land applied in the Chesapeake Bay watershed, where they have found trace elements of arsenic in Maryland's Pocomoke River.[3,4,5,6,7]

Roxarsone, or 3-nitro-4-hydroxyphenylarsonic acid, is currently the most commonly used arsenical compound in poultry feed in the United States, with a usage of 23 to 45 grams of chemical per ton of feed for broiler chickens for increased weight gain, feed efficiency, improved pigmentation, and prevention of parasites.[3,8]  Roxarsone is used in turkeys as well as chickens.[9]  By design, most of the chemical is excreted in the manure.[2,3,5] 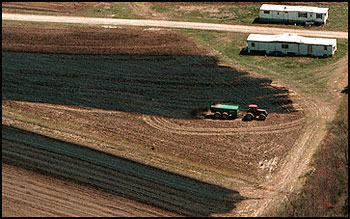 Minnesota state law sets an ambient air limit standard of 0.002 micrograms per cubic meter for arsenic.  There is reason to believe that the "Fibrominn" incinerator may violate Minnesota's Chronic Health Risk Value for arsenic and arsenic compounds, which ought to be measured at Fibrominn's property line.[16]

State regulators in Minnesota, where the first poultry waste incinerator in the U.S. is planned, are relying on self-reported data from one of Fibrowatt's 3 existing facilities (all of which are in the UK), concluding that arsenic won't be a major concern at the proposed Fibrominn plant.[17]  However, one of the other two Fibrowatt plants in the UK (Fibrogen in North Lincolnshire) is listed as the 27th largest arsenic air emitter out of the 93 listed in the 1998 Pollution Inventory of Industrial Units in England and Wales.[18]

It is being assumed that emissions from a poultry waste burner in the U.S. would be comparable to the British facilities, even though no effort has been made to evaluate whether arsenical and other feed amendments are used as widely in the British poultry industry as in the U.S.  Until this is known, extrapolations of emissions from Fibrowatt's UK facilities to those in the U.S. are inappropriate.

Arsenic is more toxic than lead and has been the subject of much political debate after much scientific research led policymakers to seek to lower the allowable amount of arsenic in drinking water.[19,20]  Arsenic's use in wood-treatment chemicals has been phased out.[21] Arsenic is classified as a known human carcinogen and, when inhaled, can cause cancer in humans, particularly lung cancer.[10,22,23,24]  A new study suggests that arsenic interferes with hormones, making it a potent endocrine disrupter.[25]

The air pollution permit for the proposed Fibrominn project allows that incinerator to emit nearly 5 million pounds of regulated air pollutants each year, including 388,000 pounds of sulfuric acid, 236,000 pounds of hydrochloric acid and 4,600 pounds of hydrofluoric acid.[26]  That's about 1,722 pounds a day of acid gases released into the sky above Benson, Minnesota.  The permit states that "the proposed source will be a major source for hazardous air pollutants." This is a gross understatement.  It would not only be "a major source" -- if nearing their permit limits, the incinerator would be the largest source of sulfuric acid in Minnesota (exceeding the COMBINED emissions of all of the coal-fired power plants and other sources in the state which reported their toxic releases to the U.S. EPA's Toxic Release Inventory database in 2000).  It would also be the second largest source of hydrochloric acid air pollution in the state, beating out the state's paper mills, an oil refinery and all but one of the state's coal-fired power plants.[27]

The Blue Ridge Environmental Defense League (BREDL) -- a regional grassroots environmental network based in North Carolina -- is fighting Fibrowatt's plans to build three poultry waste incinerators in North Carolina. They compared the permitted emissions from Fibrowatt's Minnesota plant to the permitted emissions of a new coal power plant planned in North Carolina. The comparison shows that Fibrowatt's permit limits are higher for four of the five major regulated air pollutants regulated in these permits. Emissions of nitrogen oxides (NOx) and acid gases (hydrochloric and sulfuric acids) would be 2-3 times higher from Fibrowatt (129% and 162% increases, respectively). Emissions of particulate matter would be 33% and carbon monoxide would be 60% higher. The sulfur dioxide emissions would be 53% lower.[28]

In November 2007, Fibrowatt countered this comparison, arguing that they wouldn't be as polluting as a coal plant. They did their own comparison -- comparing actual emissions from the just-opened Fibrominn plant to existing coal power plants in North Carolina.[29] While a comparison of actual emissions would naturally be best, Fibrowatt's comparison is a false one. They compared their incinerator to coal power plants that were built decades ago, which would be illegal to build today, without being subjected to much more stringent air pollution laws. As it turns out, BREDL's comparison is more accurate, as it compares "apples to apples" by looking at recent permits under modern-day air pollution laws.

When Fibrowatt was asked whether they could meet the current limit for nitrogen oxide emissions that the Cliffside coal power plant proposed in North Carolina would have to meet, they responded that they could not. An environmental engineer in the North Carolina Division of Air Quality affirmed, in a 2006 article in the Charlotte Observer, that Fibrowatt's "emissions would be similar to those of regular coal-fired power plants."[30]

Dioxin was declared a Class 1 carcinogen, or "known human carcinogen," by the International Agency for Research on Cancer (IARC), an arm of the World Health Organization, in February, 1997.[31]  This was confirmed by the U.S. National Toxicology Program in their Ninth Report On Carcinogens.[32]  In 2001, Bush's EPA signed an international agreement seeking to eliminate sources of dioxin.[33]  Dioxin is formed accidentally in the course of most incineration processes and in certain other industries where chlorine is used.  Incinerators are the largest known source of dioxin.[34]

Dioxin wouldn't be much of an issue if the ingredients for forming dioxin weren't being placed in the incinerator.  Dioxin production requires hydrocarbons and chlorine.  Poultry litter is full of hydrocarbons, both in the manure and the bedding.  There should be no shortage of chlorine in the poultry litter, either.  This is apparent from the huge amount of hydrochloric acid that the Fibrominn incinerator would be permitted to release.

One of the sources of chlorine is from the various drugs and pesticides used in the poultry industry.[35]  Chlortetracycline is a chlorinated growth-promoting antibiotic widely-used in the broiler industry.  Also, at least seven other drugs, most of them anticoccidials are chlorinated.[36]  One of the more commonly used anticoccidials is Amprolium.  The residues in poultry litter of Chlortetracycline and Amprolium alone rivals that of Roxarsone, the most common arsenical.[37]  With this many tons of chlorinated drug residue in poultry litter, there is undoubtedly an ample supply of chlorine for dioxin formation.  After all, dioxins are typically measured in nanograms and picograms, since they are toxic in such tiny amounts.

Poultry are treated with copper sulfate to avoid a common disease called "aspergillosis." Evidence from chicken litter in Arkansas shows nearly twice as much copper as arsenic in poultry manure.[10]  In fact, copper levels in chicken litter as high enough that cattle have died from copper poisoning from being fed chicken litter.[38]  Iron and zinc are also used as feed additives.[35]  They are found in even higher levels in poultry manure than arsenic and copper.  Arkansas chicken manure contains 11 times as much iron as arsenic and 12 times as much zinc.[10]  Fibrowatt's existing poultry waste incinerators in the UK produce ash which, according to Fibrowatt's own data, contains significant amounts of copper, iron and zinc.[15]

Copper, iron and zinc are a particular hazard when placed in an incinerator, since they serve as catalysts for dioxin formation.[39]   This means that these metals will create a surface for dioxins - the most toxic chemicals known to science - to form out of the hydrocarbons and chlorine in the burner.  While copper is the most effective catalyst, iron and zinc are also quite effective at boosting dioxin production.

Although poultry waste incineration is touted as "renewable biomass" and "green energy," the dioxin pollution levels being granted for the Fibrominn incinerator are comparable to dioxin emissions from municipal solid waste (MSW) incinerators currently operating in the U.S.  MSW incinerators are - categorically - the country's largest known source of dioxin emissions.

Choose Your Own Permit

The permit has a "fill in the blanks" style emissions limit for fine particulate matter, where no limit is set by the agency and Fibrowatt gets to build and operate the incinerator for a while, then do some testing and propose what they think the limit should be, based on what they can manage to meet, rather than setting limits based on what would be considered an "acceptable" amount of pollution that wouldn't harm the health of humans and other living systems. Page A-7 of their air pollution permit states that:

Particulate Matter less than 10 micron: less than or equal to < > lb/mmBtu, based on three runs that are between 60 and 120 minutes in length. The Permittee shall propose limits after completion of the Performance Tests required below. [40]

The Fibrominn incinerator is only required to use continuous emissions monitoring systems for nitrogen oxides (NOx), carbon monoxide, sulfur dioxide (SO2), oxygen and opacity. Not a single toxic pollutant will be monitored on a regular basis. Dioxins and furans will be tested only once. Hydrochloric acid, mercury and fine particulate matter (that under ten microns in size -- called PM10) will be tested only 5 times, over the course of the first 15 months of operation and none thereafter. Other pollutants that never have to be monitored include ammonia, sulfuric acid, hydrofluoric acid, polycyclic aromatic hydrocarbons, volatile organic compounds and toxic metals (including arsenic).

Any claims of emissions being "clean" or "safe" need to be understood in the context that no one really knows what's being emitted since testing isn't being done for most of the toxic and hazardous pollutants. Continuous emissions monitoring technology exists for all of the above-mentioned pollutants, but state agencies aren't in the habit of requiring their use, and companies have no interest in obtaining data on their emissions if they're not forced to.[41]

The projected arsenic emissions from the Fibrominn plant are in the Technical Support Document, under the Air Toxics Screening Analysis. Table 10-1, titled "Fibrominn Emission Rates for Air Toxics Review" was written by Alternative Resources, Inc. on Aug 13, 2001. The table projects 0.032 tons per year (which amounts to 64 pounds per year).

Further info on CCA can be found at the following websites:

Note: the total of these existing sources is 244,375 lbs -- less than the 388,000 that Fibrominn would be permitted to release yearly